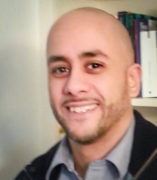 Khalid is a PhD candidate (ABD status) in Political Science with a concentration on Urban Politics and Political Theory. Khalid pursued his undergraduate studies in Economics and Tourism Studies at the Université Moulay Ismail in Meknes and L’Institut Superieur International du Tourisme de Tanger, Morocco. In Chicago, he received MA in political science at Northeastern Illinois University, Chicago. As a PhD candidate, Khalid’s research interests include urban politics in the Global South, modernity and urban marginalities, conceptions of power and the status of the “Other” in the contemporary determinations of politics.

Khalid’s dissertation, titled “Back to the Medina: Gentrification, Citizenship and Capital in Marrakesh,” is an interdisciplinary attempt to engage with neoliberal restructuring and citizenship in the Moroccan city of Marrakesh. Khalid addresses questions surrounding (international) gentrification, the housing market and the commodification of land and heritage as part and parcel of the new governing rationalities in Morocco.

“Islamism(s) and the Arab Awakening: Between Commanding the Faithful and Mobilising the Protestor,” The Journal of North African Studies Volume 18, Issue 2, 2013, pp. 248-271

“Back to the Medina: Gentrification, Citizenship and Capital in Marrakesh,” presented at the American Political Science Association (APSA). San Francisco, CA (September, 2015)

“What is the Future of Postcolonial Studies?” co-host and contributing member, Institute for the Humanities, University of Illinois at Chicago (April, 2015)

“(Dis)simulations of the Home: Women’s Labor and the Industry of ‘Chic’,” EngenderingThe Change Conference, University of Chicago’s Center for the Study of Gender & Sexuality (April, 2015)

“Ni Charlie, Ni Coulibaly: Liminality Explained to my Daughter,” panelist at “Charlie and Context” roundtable and discussion, Institute for the Humanities and the Department of French and Francophone Studies, University of Illinois at Chicago (February 2015)

“Morocco’s Islamisms and the Arab Uprisings,” guest lecturer at the University of Illinois at Chicago, Department of Sociology (January 2015)

“Can the State be Trusted in Educating our Children?” Invited address to the Centre Pédagogique Regional de Marrakech and Centre INAYAT pour le Développement (February 2014)

“Unlikely Catalysts: Women and the Arab Spring,” guest lecturer at the University of Illinois at Chicago, Gender and Women’s Studies (Fall 2012)

“Politics of the Veil,” guest lecturer at the University of Illinois at Chicago, Gender and Women’s Studies (Fall 2011)