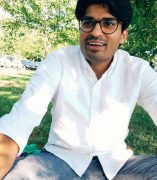 Selected Fellowships and Awards: Resident Graduate Student Fellow at the UIC Institute for the Humanities (2017-18), the Chancellor’s Graduate Research Award from the UIC Graduate College (2016-17), the Milton Rakove Memorial Award from the UIC Department of Political Science (2016)

Aviral is a doctoral candidate studying political theory and comparative politics. His dissertation examines the relationship between theories of freedom and the practice of government in modern India. This is an analytically and historically informed comparative study that relies on extensive ethnographic and archival research.