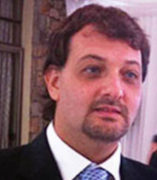 Andreas E. Feldmann is Associate Professor in the Latin American and Latino Studies Program and Department of Political Science and Principal Investigator of the Global Migration Cluster Initiative at the University of Illinois Chicago (UIC). He investigates topics at the intersection of Comparative Politics and International Relations, including terrorism, criminal politics, human rights, forced migration, and foreign policy. He is co-editor of the Routledge Handbook on the History of Latin American Migration (2022), New Migration Patterns in the Americas: Challenges for the 21st Century (Palgrave 2018) and co-author of Drug Trafficking and Criminal Governance in Contemporary Latin America: Fuzzy Interfaces and Botched Development for the Elements Series of Cambridge University Press (under contract). His work has been published in journals including The Annual Review of Sociology, Forced Migration Review, International Affairs, Latin American Politics and Society, Migración y Desarrollo, Politics and Society, Revista de Ciencia Política, Studies in Conflict and Terrorism, Terrorism and Political Violence, and Third World Quarterly among others. Feldmann is currently working on a book manuscript entitled Repertoires of Terrorism in Civil War: Organizational Identity and the Production of Inhumanity in Colombia. He has received grants from the Ford Foundation, the International Development Research Centre, and has worked as a consultant for the United Nations High Commissioner for Refugees the Inter-American Commission of Human Rights (2000‒6), Estado de la Nación Costa Rica, and the Carnegie Endowment for International Peace. He previously worked at the Instituto de Ciencia Política of the Universidad Católica de Chile and the Human Rights Program of the University of Chicago. He earned a Ph.D. in political science at the University of Notre Dame.