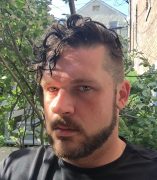 Daniel E. Williams comes from academia from a career in Texas politics where he advocated for LGBT issues in the Texas Legislature.

Daniel is currently investigating racial bias in white LGBT voters and its effect on voting behavior.